Many Region residents know about the many veterinary services offered to companion animals at Purdue in West Lafayette…. but may not realize the extent to which their medical expertise is sought.  A small animal surgery team at Purdue University’s College of Veterinary Medicine recently treated the dislocated hip of a female wallaby from Lafayette’s Columbian Park Zoo. Wallabies are small or mid-sized marsupials, or pouched, mammals who belong to the kangaroo family and are found primarily in Australia and on nearby islands, according to National Geographic.

“Columbian Park Zoo called us in the spring, asking if we could help them treat a wallaby with a dislocated hip and we thought, ‘Sure, why not? ‘ ” said Mark Rochat, clinical professor and chief of small animal surgery in the Department of Veterinary Clinical Sciences at the college.  Rochat said the key to surgery on the wallaby was using a Tightrope™  device to “create a new round ligament.” and essentially treated the the wallaby similar to a dog with a hip dislocation. “The hip is a ball-and-socket joint and the round ligament is one of the major anatomic structures that holds the ball in the socket. The Tightrope™ is incredibly strong and its job is to take the place of the torn round ligament and hold everything in place, until scar tissue can build up and other structures damaged by the dislocation can heal,” Rochat said.

There are some distinctions, of course, between a dog and a wallaby, Rochat said. “The anatomy of the wallaby hip is different from the dog, which makes sense given their very different way of locomotion,” he said. “It was a very interesting surgery.”

“The wallaby seems to be doing fine, and radiographs made about a month after surgery showed the Tightrope™ in place and doing its job,” Rochat said.  Zoo officials appreciate the college’s efforts. “The Columbian Park Zoo’s continued partnership with Purdue’s veterinary college not only provides the zoo with the benefit of access to a variety of animal specialists close by, but also gives real-world experience to students,” said Dana Rhodes, director of the zoo. 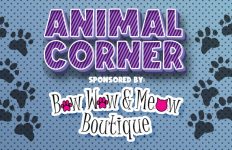