In Hammond, the city’s first bicycle repair station is up and running. The announcement from Hammond Mayor Thomas McDermott Jr says bicyclists traveling the city’s growing network of bike trails can now inflate tires, make adjustments and even some repairs at the DERO (pronounced ‘dair-oh’) Fixit Station located along the Wolf Lake Trail near the guardhouse. Officials say the fix-it station was made possible thanks to a gift from the United Citizens Association (UCA), whose members established Hammond’s first bike path some 45 years ago. 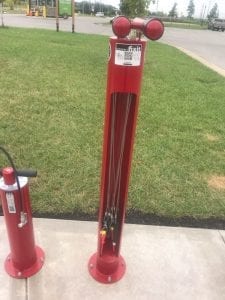 DERO Fix it Stations includes all the tools necessary to perform basic bike repairs and maintenance, from changing a flat to adjusting brakes and derailleurs. Housed in a modified well casing, tools are securely attached to the stand with stainless steel cables and tamper-proof fasteners. The Fix it station also allows users to hang the bike from hanger arms which allows the pedals and wheels to spin freely while making adjustments. The station also features a heavy-duty air pump with a 1-inch solid pump shaft. The city says the unit’s bright red paint makes it stand out and quite visible.

“The UCA has a long history of providing and promoting improvements to the community, in particular Robertsdale,” said the mayor. “Its members actually established Hammond’s first bike path in 1974 along Sheffield Avenue, were advocates of the George Lake Trail, and many other community improvements such as the hanging baskets along 119th Street in Robertsdale, and I appreciate their continued commitment to making our city a better place to live and visit. As an avid bicycling enthusiast, I was impressed by how heavy-duty and durable the fix-it station is.”

“The UCA supports Mayor McDermott’s efforts to make Hammond a destination for bicyclists. Hammond offers one of the biggest and best trail systems in the State of Indiana, and it is our hope that this is the first of several fix-it stations in Hammond and that the trend continues to neighboring communities in the future,” said UCA Vice President Tom Dabertin. The UCA organizes the annual Ride and Rail Tour to Chicago in cooperation with the Northern Indiana Commuter Transportation District (NICTD) and was instrumental in establishment of the WHAM Ride. 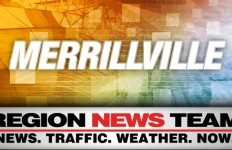 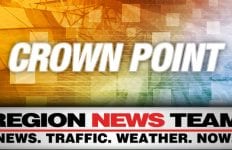