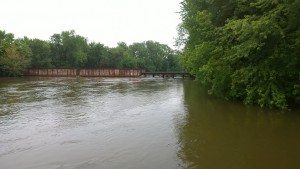 Photo of US-41 Kankakee River Bridge at Lake/Newton County. Provided by Jay Stevens.

Indiana Governor Mike Pence is scheduled to be in Jasper County today (Wednesday), where he will meet with farmers and survey flooding at Culp Farm in Rensselaer.  Pence will also survey flooding at Plank Farm in the town of Walton in Cass County.   In northwest Indiana, flood warnings continue for the Iroquois River near Foresman affecting Newton County, and the Kankakee River at Shelby affecting Lake and Newton counties.   Several other flood warnings remain in effect across the state, with some having been extended in parts of northern Indiana.  The National Weather Service Indianapolis office on Tuesday said river flooding that persisted in some areas in western and southern Indiana for nearly three weeks in June would continue into early this month.

US 231 Closure in Jasper County for Culvert Pipe Replacement→